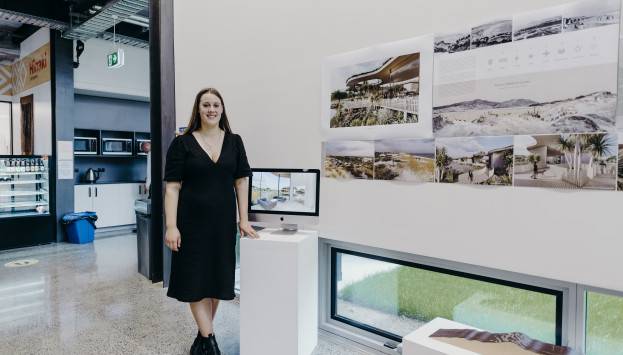 The “Kaituna Wetland” proposal would collect and hold excess water using natural filtration, creating a healthy wetland to help reduce the risk of flooding in nearby residential areas.

It would also utilise extensive native planting to help protect St Kilda/St Clair beaches from erosion, including restoring Kettle Park back to natural sand dunes to protect the wetland from sea swells.

“Recovering the former ecological and landscape values of the wetland would reduce flooding and mitigate the effects of climate change, including rising sea levels,” Georgia says.

“My design allows for water to come in from either end of Forbury and a backflow valve releases the water out to the ocean when a certain water level is reached.

As well as paths and boardwalks, Georgia’s design would include a community centre comprising a series of connected and standalone spaces accommodating scientific, educational, recreational and retail purposes.

The final-year Architectural Studies learner says it took several months to research this area of South Dunedin, which used to be a large wetland called Kaituna.

“My design then took another 3-4 months, most of which focused around landscape and environment and then integrating the buildings within that context. Wetlands are complex ecological systems.”

Comprising a mix of fresh water from the Caversham hills and tidal seawater from Otago Harbour, Kaituna was a habitat for native birds, fish and plants. It was a significant hunting and gathering area for many generation of Māori.

After European settlement, Kaituna was drained and reclaimed for farming and then urban development.

Work with our students